Talented students from The Arnewood School have got in on the act to produce a West End standard show to sell-out audiences. They came together to stage Sister Act across three nights.

From performing in the cast, choir and band to making sure everything was all right on the night as backstage crew, the show involved nearly 80 students in total.

The musical, based on the iconic movie starring Whoopi Goldberg, is a tribute to the universal power of friendship and sisterhood. It tells the hilarious story of a disco diva whose life takes a turns when she witnesses a murder and is hidden under protective custody in the one place she will not be found – a convent, disguised as a nun.

Director of the show was Head of Drama Kirsten Watson who was ably assisted by Assistant Director, Drama Teacher, Tanya Faramus. Musical Director was, Head of Music, Richard Elkington who led a talented band of students and staff.

Headteacher, Nigel Pressnell, said: “When talent and opportunity collide something magical happens. I am so proud of the students’ performance and staff at The Arnewood School who have again created an environment where everyone excels at the highest level in the performing arts.”

The Arnewood School boasts a strong tradition in staging musical theatre productions. Previous shows have included School of Rock and We Will Rock You, with former Head Girl Olivia Hilton-Foster now studying at the prestigious Guildhall School of Music and Drama. 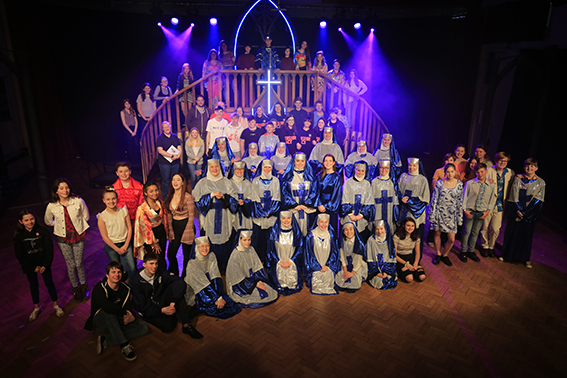